The next series, entitled “Ordinary People”, is from my meetings with various people in different contexts, whether charitable or not. Through this series of portraits, I wish to highlight these “ordinary people”, who are however of the ordinary, each in his own way. By their courage, their actions, their ways of crunching life, despite difficulties, origins, differences, wanderings … They all seek the beauty of life.

For the elaboration of the texts that accompany the photographs, I work in collaboration with Claire Veys, who draws up these texts from the testimonies I provide. Thank you Claire ! 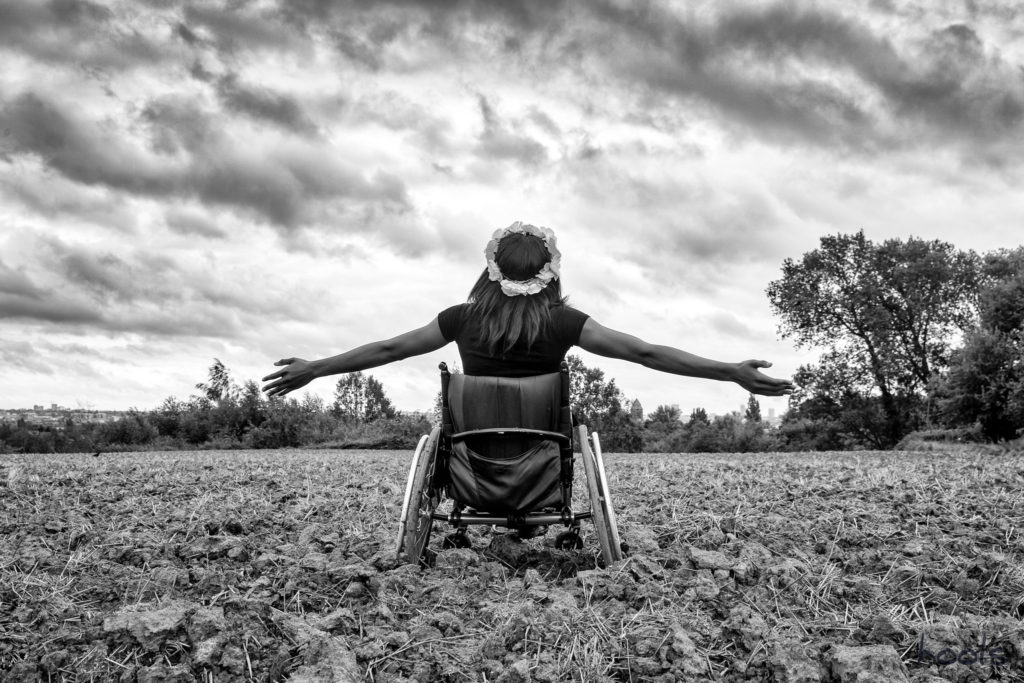 Lea had decided to be in the middle of the field for some last pictures during our shoot.
So I put down my gear, helped her get up, and helped her get to where she wanted in the muddy field.
I went back for her wheelchair and then helped her get into it.

Did I ask her to open her arms, (did I imagine the scene like this before? ) OR
Had I imagined the scene would be like this ?
Or did I take advantage of a moment of Lea’s freedom?

I do not know.

When I met her, she was a volunteer at a concert.
In a wheelchair.
She is an athlete.
She is a model. 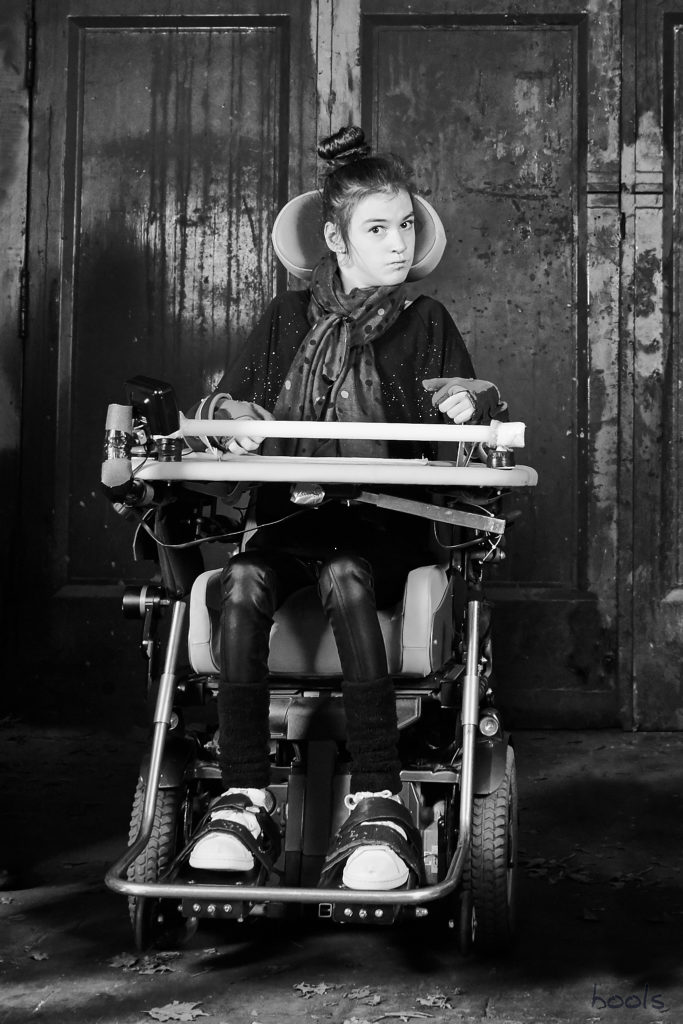 She pulled off her jacket, showing her sequined blouse.
She was proud.

Johana does not speak, but her eyes say everything.

They say beauty, they say pride, they say challenge.
They speak of her daily struggle to live, glued to this chair, attached to her handicap.

Why, why me. After all, I’m normal. Just a little different?

During the shooting, I try to direct her. You have to move just a bit to the right. A little further forward. A little to the side. Can you turn? The setting is delicate; there are motorcycles not to be touched on each side. Johana directs her chair with dexterity and precision. She stops to the millimeter. And halts me with one stare the moment I started to help her.

And then she looked at me. Her head a little turned, eyes straight in the eye of the camera.

Johana is not afraid of anything. Neither the trials of life nor the gaze of others.

And her look is a challenge.

Nothing will ever be impossible. 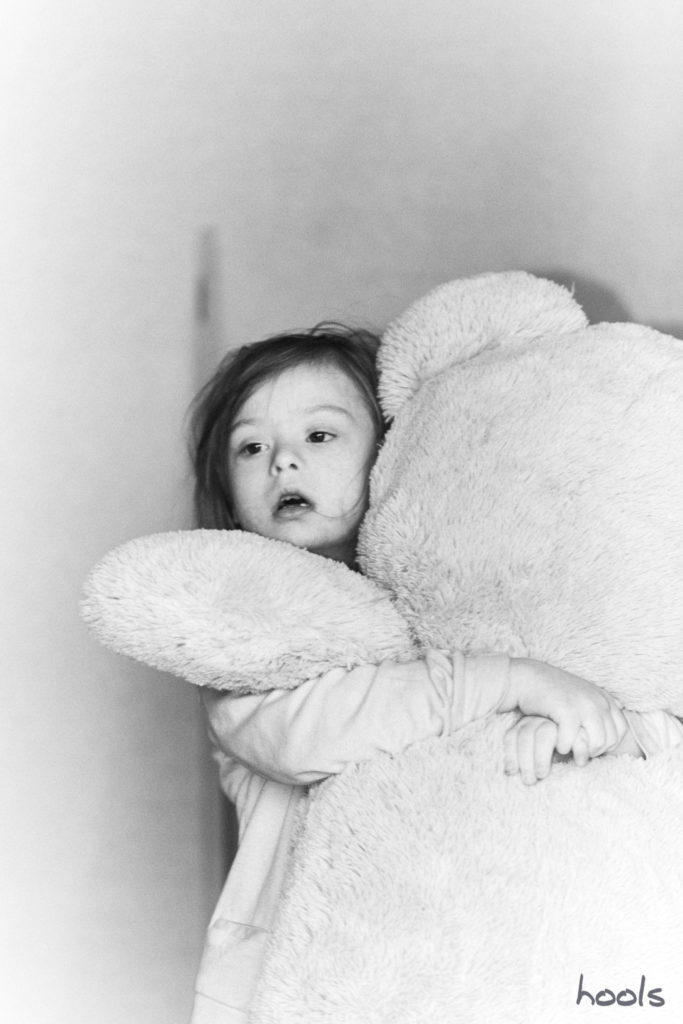 She looks at the world, and time stops in the face of so much love in her look.

She has the tenderness of an angel who has fallen on earth.
She will never be like her brothers and sisters. But she does not know that.

Bibouille, like all kids, burst into the life of her parents.

In a moment of fatigue, she held on to her big teddy bear, ruffling her hair.

She loves parmesan, her red bike, her little brother, her big sister, her mom, her dad, unicorns, the sea, drawings …. And so many other things.

Bibouille smiles all the time, she loves life so much. She is full of life.

Why should it be otherwise? 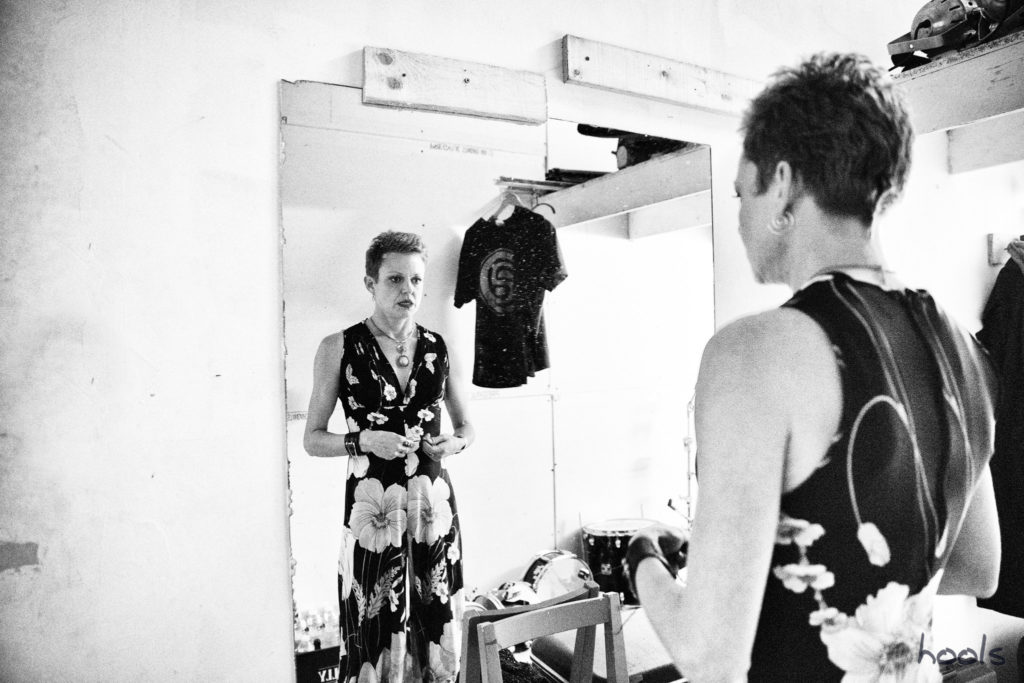 Just before stepping on stage.
she checks, with a last glance, the image returned by the mirror.
Last moment of calm.

In a few minutes, on stage,
the music,
the lights,
the energy,
the singing,
the dancing,
the rhythm,
Will entirely fulfill her.

On stage, she explodes, she radiates, she shines.
She incarnates the emotions brought forth by the music.
She sings, her voice coming from the deepest of her guts.
Nothing, ever, makes her forget that she is alive.

Tracee enjoys a last moment of calm,
And adjusts her blouse,
Just before stepping on stage. 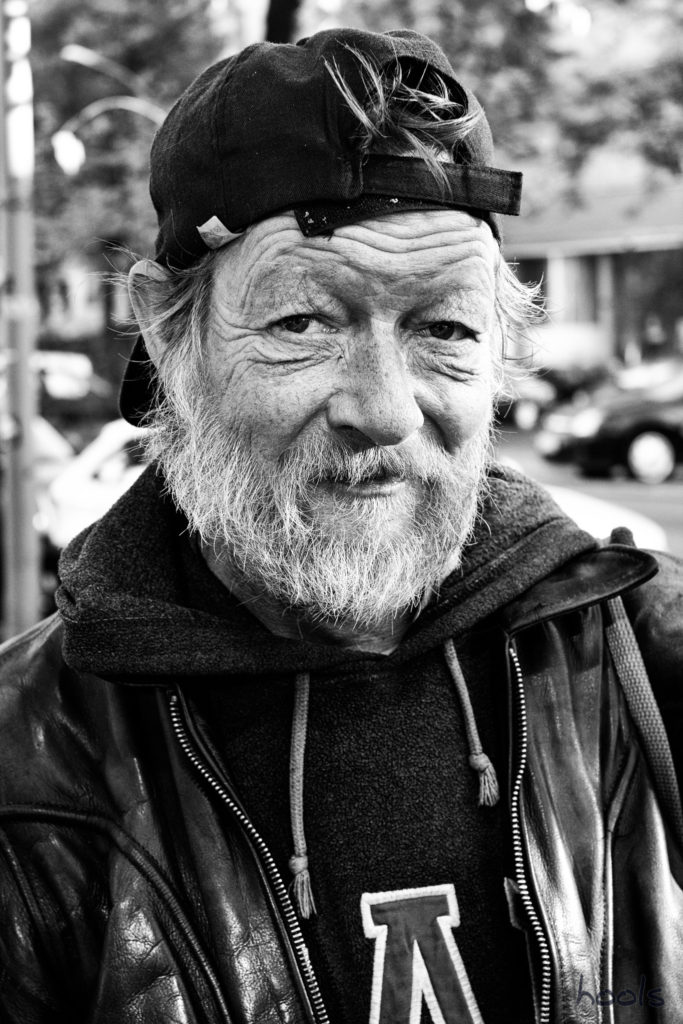 I was taking pictures of the facades of an urban planning project in the streets of Berlin.

At close distance, a homeless man was rummaging through a garbage bin.

Disinterested in the building, my photographer’s eye was attracted by this man. Gathering all my courage, braving my natural reserve, I approached the man:
– May I please take a photo of you? I asked in hesitant German.
– Warum? Why ?
The man looked at me, intrigued.
– Für mich, for me …
I tried to explain by making big gestures.
– Aaaah! Kunde! Said the man, smiling.

Art. He nodded. This word had meaning, explained everything. The man existed, as a person, in my eyes. The picture would be neither voyeuristic nor dishonest. It would be a mere encounter, a moment. A link between two people, between him and me. The one who photographed, the one who let himself be photographed.

This is visible in the man’s eyes. He looks without fear, frankly, with kindness, aware of the gift he has given me, even in his utter destitution. He still has the power to offer.

After cordial greetings, each of us went back to our lives, keeping in mind this encounter.

The man did not ask to see the photograph. He did not say his name. He smiled, then left. 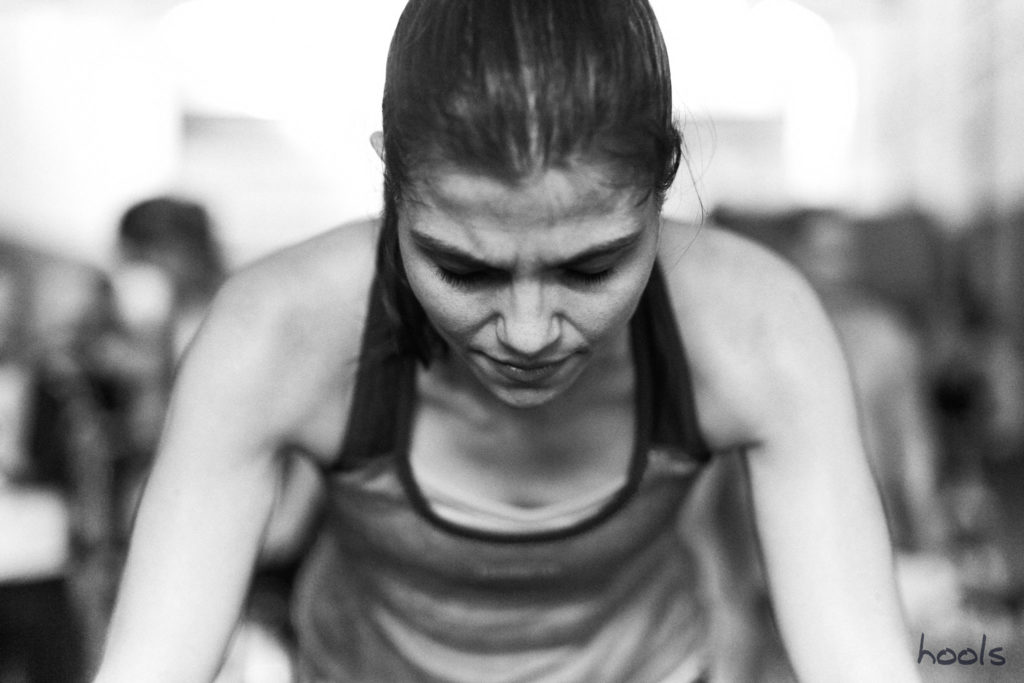 And the second after, in spite of her intense concentration, the dazzling smile that illuminates her face, an open and frank look. 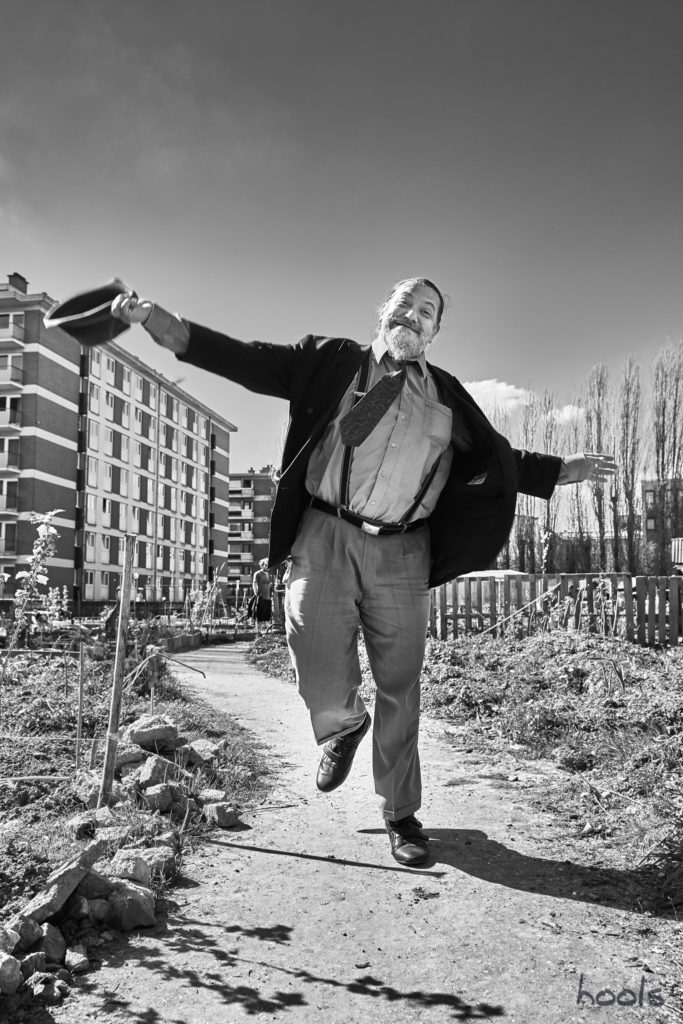 Who is he? Where is he from?

He is there, friendly neighbour, sympathetic comedian, jack-in-the-box, theatrical Harlequin.

In this collective and urban community garden, he poses for the pleasure of all and even more so for the eye of the photographer.

An immense tenderness emanates from his smile, his grimaces. His tie moves to the rhythm of his movements – tic, tac. On this footpath, as on a stage, he plays. He amuses, he makes us laugh, he brightens the day.
He brings everyone into his dream.

Alexandros was also there.

Who is this tender and burlesque Harlequin?

After making the company smile, he returns to where he came from with his mystery. 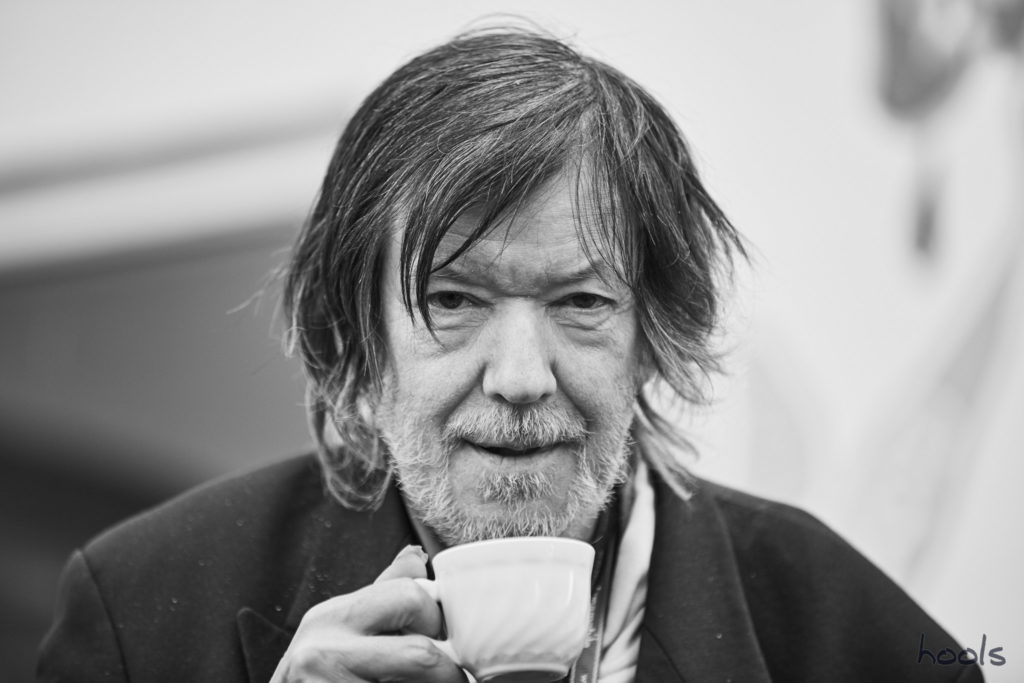 In his eyes, there is
benevolence
experience
trials of life

In his eyes, there is
his wife, no longer present
his son, different
his daily life, infinite

In his eyes there is
the sea
elsewhere
where he would go – but he will not.

Eric looks. Here, now. Right in the eyes.
Impossible to look away. 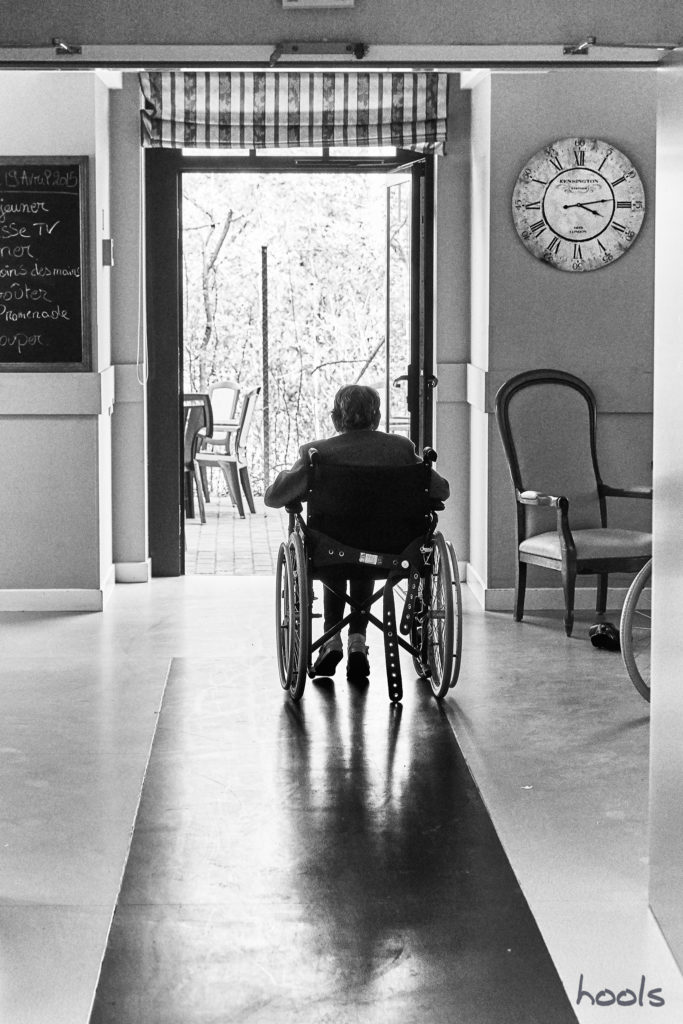 After having lived a lifetime, Therese is overtaken by the passing of time.

She maybe would like to leave. Leave the shadows of the past, continue to advance, to discover.
This day she was in a bad mood. She glared at her daughter. Is she only aware of the suffering of her daughter, whom she scarcely recognizes today? She glared dark looks, like a child, to express her anger. And from time to time, while I was taking pictures, she would give me a wink.

After having lived a lifetime, Therese is overtaken by the passing of time.
All she has left is anger, winks …

To resist is to exist. 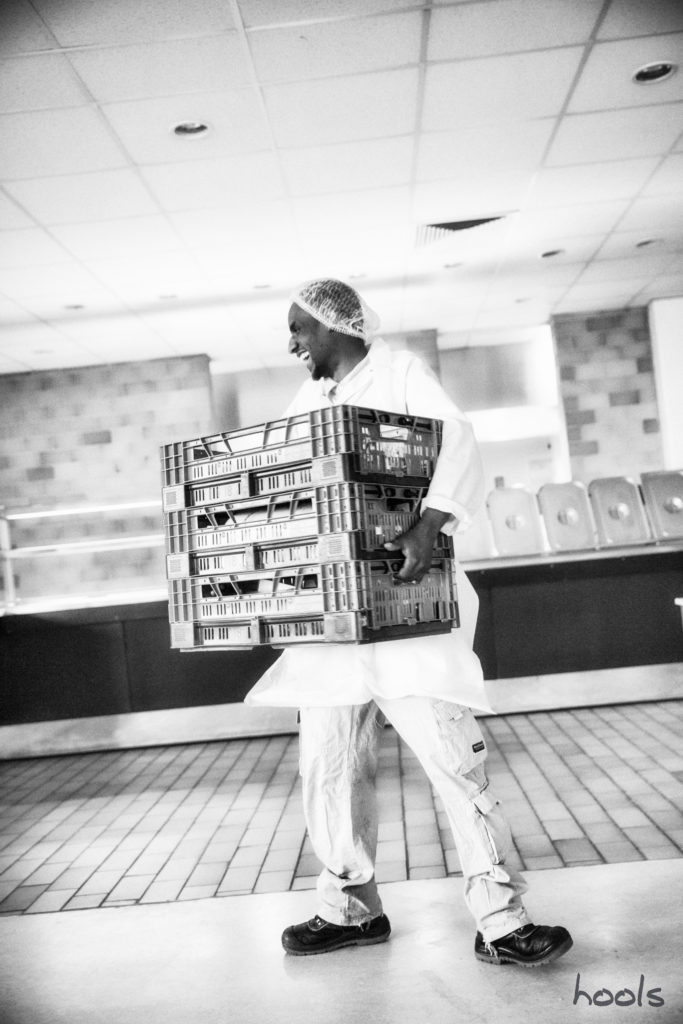 He burst out laughing.

For this shooting, I asked him to walk back and forth holding his crates in his arms.

Ilali took the pose, proud of his work. Proud to work. Happy to be there.

And then, after countless round trips for the shots, he burst out laughing.

The incongruity of the situation. The joy of being there. The sharing of happiness. Communicative happiness.